On having a talent and doing the right thing

Some time ago, I was asked by a friend of mine to judge a local photography club contest.  This was a great honor in an of itself.  I took some time off to travel about an hour and a half, back to my home town, to have a day of judging.  I was able to see some great images.  So many so, that it took all day to classify and grade them.

During this time I had to have some coffee.  Anyone that knows me, knows that I have to have some of the dark stuff to function.  We headed downtown to a shop on Commercial Street.  We ended up at the Granada Coffee Company.  Beverly “Bev” Beers and I struck up a conversation and she threw out a challenge (although indirect) about a painting that was on the wall.

She said she loved the painting on the wall created by local artist George Crocker.  The painting was hanging on the south wall of the shop in a prominent spot.  A night vision, the shop is depicted next to the Granada Theater with a busy sidewalk filled with patrons of the shop.  Bev said she had four other photographers try to photograph the painting so that she could have a digital image of it, but no one had been able to photograph it without having hot-spots show up in the image.  The challenge came when she said, with all of the others not being able to shoot it, she was sure I would not be able to either.

I ran out to the car and came back with my camera and tripod.  A few minutes later, I knew I had an image that was spot on as a shot of the painting.  Beverly was amazed that I would be able to grab a shot of the painting that fast.  So we talked some more about coffee and the great little town of Emporia.  We talked about how I had shot the Dirty Kanza 200 (http://www.dirtykanza200.com), and had wished there was coffee available late into the night and morning hours.  Beverly chimed in that they had planned on having the shop provide some coffee for the workers of the DK starting in 2015.  It was then that I hatched the idea of my fee for the shot of the painting.  Coffee!  I told her that was what my fee was... for them to provide coffee for the workers of the DK.  She looked at me, and said she was planning on doing that anyway.  I said I had heard that, but that was my fee.

I have started this year to find small things to help others in some way.  I had heard what she said.  I also thought that me helping her with a shot, and it not costing a small business anything oner than what they had already planned on doing, was a way to give a little back. It also had Bev saying yes to something she already was going to do.

I also talked to Bev about the painting.  She said the artist was local and just a great guy.  I asked what she was planning on doing with the image.  She said they had thought about using it for the shop for such things as posters or promotional items for the shop.  I could tell as she talked about he painting, just how much she enjoyed the image hanging on the wall.  I then had to explain what we would have to do in order for me to be able, in good conscious and by copyright, to give her the image for profit use.  We talked about needing a release from the artist for the use of my copy of his art.  Being a photographer and artist, I would not allow use of the image without the original artist knowing and approving it.

A little time later, a letter arrived in the mail. George had signed a letter stating he approved of any use of his art for the store.  What a relief.  I did not want a creation of art being used in a manner against the wishes of the artist, and then having that use coming back as a reflection of me.  With the letter in hand, I mocked up  poster.  Something simple and in the format of the original. 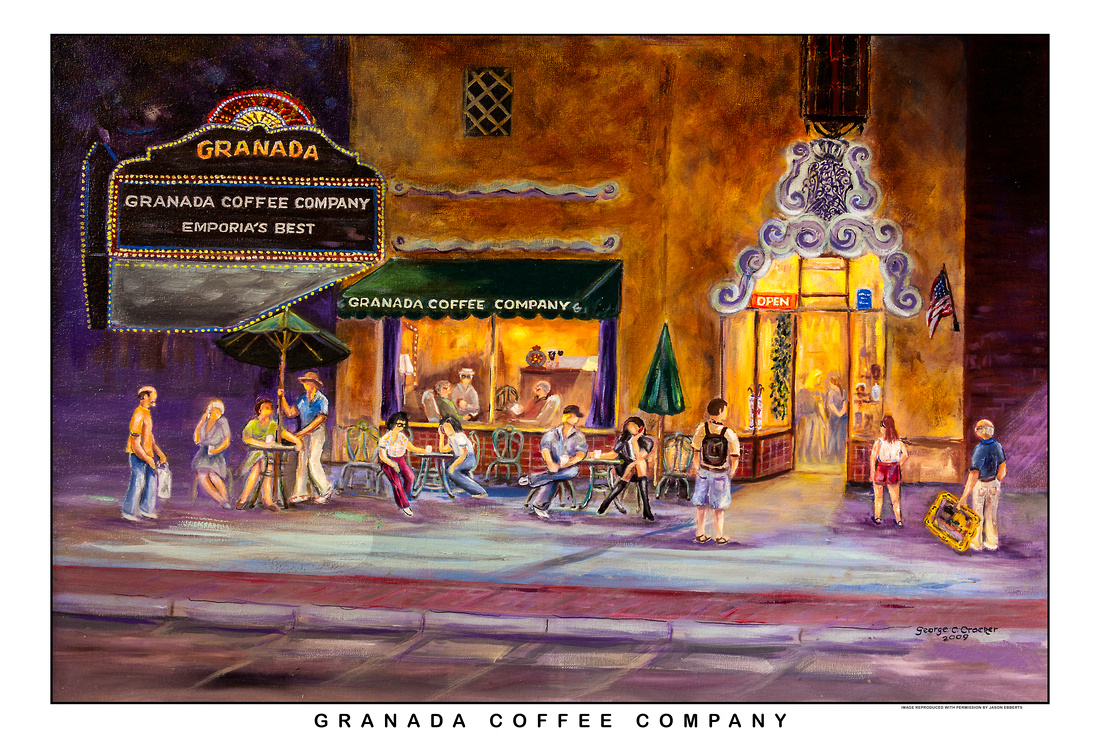