"On November 12, 1996, legislation was passed creating Tallgrass Prairie National Preserve in the Flint Hills region of Kansas. A new superintendent was assigned to the site in February 1997, and planning activities for the preserve are now underway. A General Management Plan (GMP) for the site was finalized on December 6, 2000, when the Acting Regional Director signed the Record of Decision.
The preserve protects a nationally significant example of the once vast tallgrass ecosystem. Of the 400,000 square miles of tallgrass prairie that once covered the North American Continent, less than 4 percent remains, primarily in the Flint Hills of Kansas.
Tallgrass Prairie National Preserve is a new kind of national park. The preserve is 10,861 acres, but most of that land will remain under the ownership of the Nature Conservancy, which purchased the land in 2005. The land was originally purchased by the National Park Trust in 1994. The National Park Service may own up to 180 acres, yet the legislation calls for the entire acreage to be managed cooperatively by the National Park Service and the private land owner." - Tallgrass Prairie National Preserve 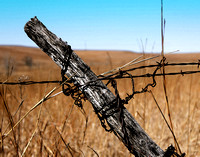