Thank you for your patience while we retrieve your images.

104 photos
Built in 1914, Union Station encompasses 850,000 square feet and originally featured 900 rooms. In its prime as a working train station, accommodated tens of thousands of passengers every year. At its peak during WWII, an estimated one million travelers passed through the Station. The North Waiting Room (now the Sprint Festival Plaza) could hold 10,000 people and the complex included restaurants, a cigar store, barber shop, railroad offices, the nation's largest Railway Express Building (used for shipping freight and mail) as well as a powerhouse providing steam and power.
Closed in the 1980s, the Station sat empty and neglected, escaping demolition on several occasions. In 1996, a historic bi-state initiative was passed to fund the Station's renovation, which was completed in 1999.
The Station is once again a popular destination for the surrounding community just stopping by for lunch or to mail a letter from the post office in the west end of the Grand Hall. The station also draws tourists from all over the world who marvel at the Grand Hall's 95-foot ceiling, three 3,500-pound chandeliers and the six-foot wide clock hanging in the Station's central arch.
Today's Union Station is filled with fine restaurants and unique shops. And just like in 1914, you can catch the train at Union Station's Amtrak stop. 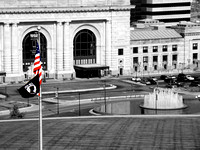 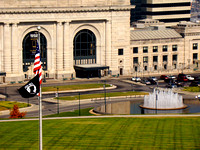 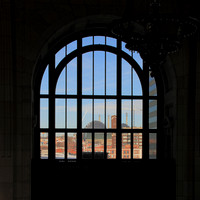 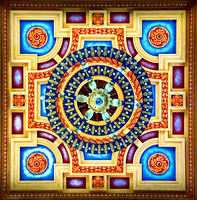